As you will have no doubt understood from the Prime Minister’s announcement yesterday evening, the new lockdown means that ALL club hockey is suspended for the time being, both for seniors and juniors. This is likely to remain the case until the middle of February.

The East League are hoping to resume adult leagues at some stage, with matches potentially being played in March and April. Whilst teams will not now be able to play the entire fixture list it is likely that leagues will be decided on average points once all teams have played each other at least once. We don’t yet know what is happening with the Junior competitions.

Of course, we will continue to monitor the situation, and hope that we will have some better news to share with you soon.

In the meantime, we hope you all stay safe and thank you all for your support for IES.

With the IES crest added to the left breast and a back print, this jacket is both stylish and perfect for those wet and windy days.

Available in either black or red (sizes from S to 3XL) and only £19.99 + VAT inc left breast embroidery (additional artwork at an extra cost). 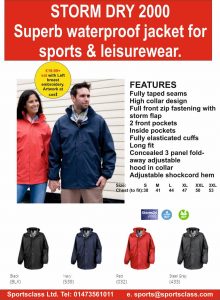 England Hockey have announced a suspension of all hockey from Thursday 5 November to Friday 4 December following the government’s lockdown announcement on Saturday.  Sadly, therefore, this means that there will be no hockey for either the Juniors or Seniors after adult training this week, which will go ahead tomorrow and Wednesday.

The club will carefully monitor the situation to ensure that we are prepared for a return to action.

For the senior section, this could see league matches being played on the 5th, 12th and even the 19th December. Equally with access to facilities likely to be an issue for some clubs and no certainty that the lockdown will end on 4 Decemberwe may encounter a longer delay.

For the junior section, if the lockdown is lifted, we may be able to return to training on Sunday 6 December, but we will need to wait and see as to whether the scheduled EH matches for the U14 and U16 girls will go ahead on that day, or whether they will be delayed.

As always, we will keep you in touch with developments as we know them.

Dereham away brings shivers to many a spine. The pitch is slow, it’s a long way from Ipswich and IES 4th XI invariably lose the match and some precious elements of the away changed strip. Would the 2020 version be any different? And it wasnt any different in terms of palaeontology – the Pulham dinosaur was still standing proud (all be it without scarf).

Well after picking up points at home against Thetford on the preceding Saturday, the squad changed again. The SS were drafted back in (Scarff and Spurling) and TB was experienced again (Thornton and Black). These four were combined with Williams 1 and 2, Elsom, Whiting, Vince, Ramsey and Murray. And just to make up the numbers we experienced the MP shuffle – Meades replacing Page.

The warm up was surprisingly productive and the match started in glorious Norfolk sunshine with the Maestro Elsom in jovial mood on the bench. Shortly thereafter the rain started and wow it did pour. Elsom used all his experience and found a brolly and then even greater common sense in refusing to come on until the deluge ceased. By that time IES were 1 down. Williams jnr deflected a ball high into his own D and Williams snr deflected it backwards rather than stopping it, Thornton did likewise and Dereham knocked it in leaving Black with no hope.

Dereham continued to dominate the first half but last gasp defending, some decent keeping and some poor finishing kept it close. At one point Whiting decided midfield was too much for him so he engaged in pointless discussion with one of the umpires – pointless because debating issues with an umpire isn’t to be advised and pointless because the umpire was clearly right. Then after 25 minutes the rain stopped and Thornton got cramp and the Maestro found someone to put down his brolly for him and appeared on the pitch – just in time for the half-time team talk. Our hardcore fans also reappeared from sheltering in their cars. Why, if you have driven for 90 minutes, do you decide to sit in your car rather than stand out in a monsoon watching your son play hockey, is beyond your reporter. Your reporter would have found the nearest coffee shop instead.

Anyway, the half time talk was about the team still being in it and the importance of returning all the away blue kit after the match. The second half started and the sun shone. And IES improved markedly. Vince slotted in well at right back and Ramsey linked well in midfield. The Scarff and Williams jnr left side stitch up continued dynamically and Meades and Whiting were diligent in the middle. Elsom and Simpson demonstrated that the skill required at centre forward is all about the timing of the run and Murray coped with the ineffective Williams snr rather than his normal mate Page at the back.

Then Capitan Williams made a mistake – almost a fatal one. He positioned Whiting at right post on a defensive penalty corner. Whiting stopped the ball – waited an age – and let the centre forward amble up and knock it in from a foot. At which point Whiting decided to move from embarrassment to impetuosity and swiped at the ball in frustration. He missed the ball – his stick slipped out his hand and flew hard and fast across the D and very nearly decapitated Murray – who at the time was inspecting the spot from which he’d scored an own goal in the 2019 version of Dereham. Anyway 2-0 it was and all was safe and Whiting unusually apologetic.

Then IES improved – the pressure is off when you are 2 down. And a slew of penalty corners were won. Elsom was in charge and was in military history mode. He scored one with a passable impression of Barnes-Wallis and then a bit later did the hockey verion of the Maginot Line and set up Scarff for a tap-in. Sadly, between the two – Dereham scored a third – courtesy of a Williams jnr own goal.

With 5 to go IES pressed and pressed and actually played pretty well. But despite crosses from the right, chances from penalty corners and no little effort the equalizer didn’t come. And the match finished in a 3-2 loss and with a long trip in sopping wet kit back home. Where it was then discovered that all 24 socks were present and accounted for – so much so that Williams very jnr counted 25.

IES started the day in 7th – lost and finished the day in 7th. How’s that for odd. Next week a nice easy home game against top of the %age table, UEA 2nd XI. Plenty of running required – that doesn’t bode well for 80%+ of the team.

As to man of the match – Black played well, Whiting wasn’t bad (other than decapitation – gate), Meades had his best game this season (and is another year older and didn’t nick any socks this year) – but the award goes to Murray. He played well – didn’t score an own goal – and still had his head despite Whiting’s best efforts.

A huge thank you to all on our Covid-19 working group and especially to Moira Bryan, James Gray – our Covid Officer – and Phil Buck for all their hard work in getting us back on the pitch. We are also very grateful to Dawn Claxton for arranging some PPE equipment and additional training in the use of PPE for all our first aiders.

As you will all appreciate a lot of time and effort has been invested in getting the various elements for a safe return in place and it is very important that the whole membership support and respect the new procedures and that we keep everyone at our club and our visiting team as safe as is possible.

We are also very grateful to Moira who has kindly agreed to take on the Membership Secretary role, at least in the short term. Moira has already made some big improvements in sorting out the management of our data and our communication with our membership.

In light of the current situation, IES Hockey Club will be keeping membership fees at the same level as last season. We do now need to collect these fees for the sustainability of the club whatever the constraints that the ongoing Covid-19 situation may bring. Full details of how to pay have been emailed to members.

The club committee has agreed a temporary reduction in match fees of £8 adult and £4 students/juniors whilst we are not providing teas for home games.  Match fees will be payable on Club Day and thereafter.

ISSC has asked that people wear face coverings when inside the Sports Centre. We would be grateful if you could follow this policy please, even if you are only popping in to use the toilet facilities.

Reminders for your diary

The move to Step 5 that will allow a return to League Hockey is not certain, but it is looking likely, with an announcement expected early next week. We will update members as soon as we hear.

A big thank you to Chris Hatch for all his work is sorting all the booking for our home fixtures with ISSC. Full details / times will be shared ASAP.

This is a reminder that Senior training starts again this week at Ipswich School Sports Centre, Rushmere:

Please note there are new Covid-19 procedures in place:

2 – Please make sure you sign in with the people in hi-viz jackets on the night, as we need to have a record of your attendance for Track and Trace purposes.

3 – Please don’t come to the training session if you have any Covid-19 symptoms:

4 – The sports centre will only be open for people to use the toilets, and there is a one way system in place.